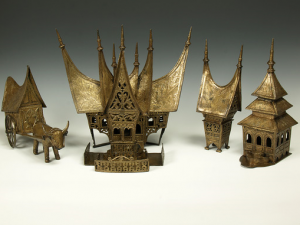 This 3D print represents a village of the Minangkabau people of West Sumatra. The original is made of brass, and was produced in the late 19th or early 20th century. We chose this object to represent Blackhall’s amazing community spirit – Blackhall is a place where people help and support each other. You can see the original object on display at the Oriental Museum.

VILLAGE HOUSE 1 by Durham University – Department of archaeology on Sketchfab 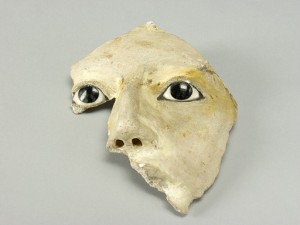 This is a 3D model of an Ancient Egyptian mummy mask dating to around 30 BC – 395 AD. The original mask is made of plaster with an inlaid glass eye. Mummy masks from this period were much more life-like than older masks. We found a connection between this striking object and the natural beauty of Blackhall’s coast and countryside that takes your breath away. You can see the original and lots more from Ancient Egypt on display at the Oriental Museum.

Figure of a Burmese man 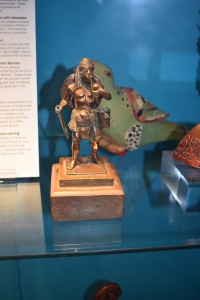 This 3D print is a model of a Burmese man. With him he carries a sword and shield. This object spoke of the warrior hidden within us all, ready to challenge and overcome difficult circumstances and prejudice faced by many communities in North-East England and find a path to a positive future for all. 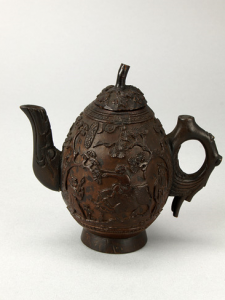 The original teapot this 3D print comes from was made in China from a carved coconut shell. Putting the kettle on and having a cup of tea with family and friends is often the first step to winding down from a long day or a way of finding comfort and friendship. 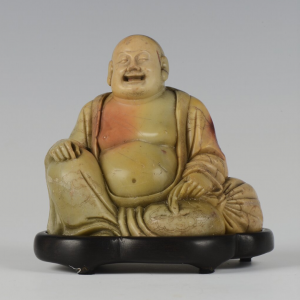 This 3D print is a Laughing Budai. His friendly face, jolly laugh and generous stomach made a strong impression on us. It reminded us of the openness, sense of humour and the big welcome found in this community. 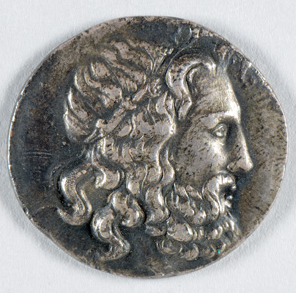 This copy of an Ancient Greek coin – one original size, the other enlarged – showing the head of Poseidon, the god of the sea, struck a chord with the residents of Blackhall. Many people recalled childhood visits to the seaside, uplifting walks along the beach, hunting for seaglass and a fascination with the Kasko shipwreck visible at low tide off the coast of Blackhall Rocks. You can see other Ancient Greek and Roman coinage at the Museum of Archaeology, on Palace Green, Durham.

Bust of an Ancient Egyptian Queen 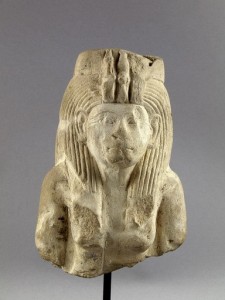 This copy of a statue of an Ancient Egyptian queen has an intriguing story to tell. Archaeologists are unsure which queen is depicted: it may be Queen Tiye, who lived around 1398 to 1338 BC and was grandmother of the famous pharaoh Tutankhamun. Tiye was the first queen of Egypt to have her name recorded on official acts. Others believe the statue is Queen Cleopatra VII. She was highly educated in mathematics, astronomy and spoke several languages. In either case, we felt a connection to the idea of a powerful, authoritative woman of the ancient world and the strong, resilient women of Blackhall.

EGYPTIAN BUST by Durham University – Department of archaeology on Sketchfab 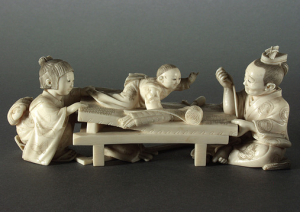 This 3D print shows a Japanese family of weavers working and playing together. The original object was made in 1913 from carved ivory. Many residents of Blackhall identified with the strong sense of family, and the support and care of people young and old at home, school, through the community centre, church and care homes. 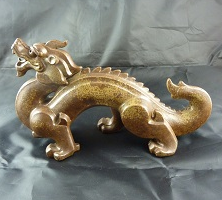 This print of a Japanese dragon grabbed the attention of the people of Blackhall. As the ultimate symbol of power and strength, dragons are respected in Japan for their wisdom and protective qualities, a world away from the fire-spitting, destructive dragons of European mythologies. We identified with the dragon’s might, making a connection to strong individuals and the community in Blackhall. 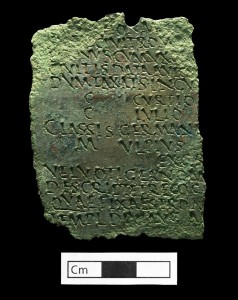 This is a 3D copy of the Lanchester Diploma. The original was found in 2016 by a metal detectorist outside the Roman fort of Lanchester. The diploma was granted by the Roman Emperor to a British sailor named Veluotigernus in 150AD. Veluotigernus had served 26 years in the Roman German Fleet and was given the diploma upon his retirement, and honourable discharge. It granted him and his children Roman citizenship, the right to marry and an exemption from paying the Roman poll tax. We chose this object because of its connection to a life of hard work and camaraderie. You can see the original Lanchester Diploma on display at the Museum of Archaeology, on Palace Green, Durham. 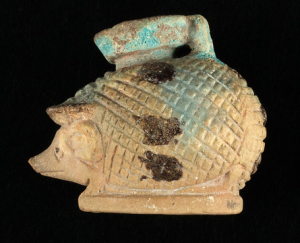 This cute 3D printed hedgehog is actually an Ancient Phoenician make-up pot that would have contained kohl – a black eye cosmetic still in use today. The original pot was probably made around 700 – 500 BC and the shape may be linked to the hedgehog’s ability to roll into a spikey ball to protect itself. Wearing eye make-up from a hedgehog-shaped pot may have been thought to magically protect the wearer from disease. It made us think of the beautiful wildlife in and around Blackhall including birds, hedgehogs, bats, squirrels and more, and the work of the litter-picking group that keeps Blackhall tidy. 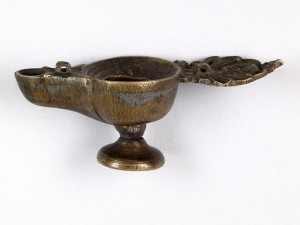 This print is of a traditional Indian lamp possibly from a temple. We recognised an immediate connection with this lamp and those used by generations of miners in the pit at Blackhall and beyond. Lighting up the darkness, lamps are often a symbol of hope across the world. 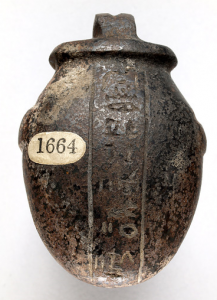 This print is of an Ancient Egyptian heart amulet. People in Ancient Egypt carried lots of different amulets for good luck and protection and this particular one is in the form of a heart. The Egyptians believed the heart to be the most important organ in the body, as it was considered to be the seat of intelligence, feelings and memory. It was the only organ left in the body during mummification. Many residents described Blackhall as having a ‘big heart’ – with people pulling together and helping those in need.

This is a 3D copy of a sculpture called ‘Combing Granddaughter’s Hair’, by artist and teacher Betty Rea (1904 – 1965). The original terracotta sculpture is part of Durham University’s Art Collection. Betty Rea believed that art should be for everyone and was a founding member of the Artists International Association, or AIA, alongside Peter Laszlo Peri also displayed as part of Street Museum. The AIA believed in ‘peace, democracy and cultural development’ and organised travelling exhibitions to enable all communities to experience art. We liked the tenderness between the grandmother and young child, as well as the artist’s involvement in left wing, anti-fascist politics. 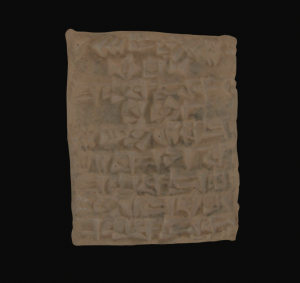 This is a copy of a clay tablet with a cuneiform inscription. The original was excavated by archaeologists from the city of Ur, in what is today Iraq. This small tablet records the sale of different amounts of wool around 4000 years ago. This made us think about how we communicate and record information today using mobile phones and electronic tablets and what archaeologists in the future will think when they find them. 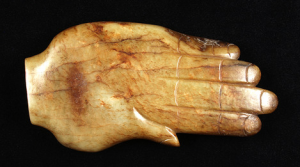 This 3D printed copy of a Chinese hand protector. The original object is made of jade and is around 1800 years old. Jade is a very hard stone and was prized for its beauty in ancient China. It was even believed to have magical properties, by covering the dead in jade, one might attain eternal life. This made us think of care, protection and helping hands.

HAND by Durham University – Department of archaeology on Sketchfab

This is a 3D copy of a resin sculpture called ‘Carousel’ by artist Peter Laszlo Peri (1899 –1967). The original sculpture is part of Durham University’s Art Collection. Born in Budapest and moving to the UK in 1933, Peri became a bricklayer and later an artist and was interested in depictions of working-class life. He was often commissioned to create large public artworks for community buildings, such as schools and housing estates, so that everyone could enjoy them. Alongside Betty Rea, also displayed as part of Street Museum, Peri was a founding member of the Artists International Association, or AIA, an organisation that believed all communities should experience art. This sculpture made us think of the ‘circle of life’ – one generation following on from the last and life continuing through its ups and downs. 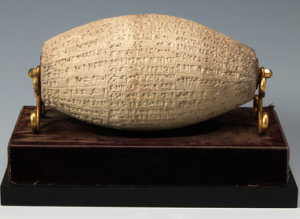 This is a copy of a clay cylinder with a cuneiform inscription. The original was excavated by archaeologists in what is today Iraq. The cylinder records the restoration of a temple to the sun god Shamash by the famous King Nebuchadnezzar II. Cylinders like these were incribed and placed underneath the walls of a temple to bring good luck avoid the building being ruined. This reminded us of important buildings and monuments in Blackhall, such as the Community Centre (formerly the Miners’ Welfare Hall), St. Andrew’s Church and the War Memorial and the commemorative plaques marking their construction.