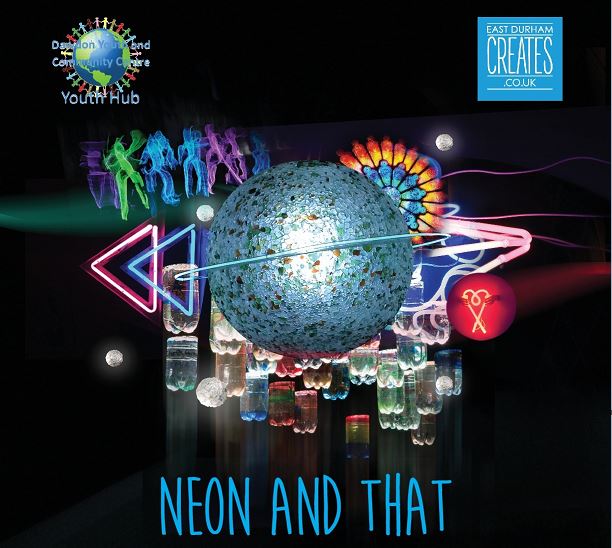 Artists Stuart Langley and Mick Stephenson brightened up January with a light-themed exhibition created with the people of Dawdon.

A glowing neon planet made entirely of Seaham seaglass and a towering beacon of light made from plastic bottles were just some of the artworks on show, alongside neon signs and seaglass planets created by young people from Dawdon Youth and Community Centre, who had taken part in workshops with the artists.

The exhibition was accompanied by the young people’s own interpretations of the works on show, including the following description of Stuart Langley’s Sea Glass Neon piece, made from seaglass and neon: “It looks like electricity or lightning running through the stones. It’s about the environment, nature is fighting its way back through.”

On Friday 13 January, the Night of Neon and That included glowing sculptures, dance performances and neon activities for all ages, while visitors to the Neon and That exhibition could read interpretations of the artwork on show written by the young people of Dawdon.

More than 200 people came to the Night of Neon and That, including Leanne Kennedy from Dawdon, who is a member of the Dawdon Youth and Community Centre’s Management Committee. Leanne said: “In every community you have an intergenerational gap and it’s not very often you get the chance to bring young people and the older generation together to work on one project. This has been the project for our area that everybody has come together as a big community and really worked hard to produce tonight’s exhibition.”