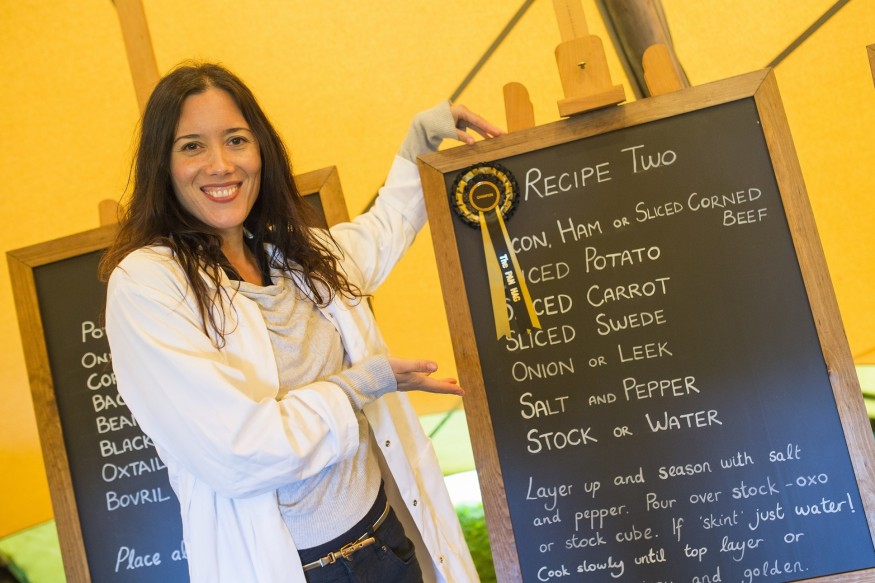 Residents of East Durham voted for their favourite pan haggerty recipe at an event celebrating the North East’s traditional food and crafts which took place on the former Easington Colliery pit site at the weekend.

Visitors to the event chose a traditional recipe of meat, potatoes, carrots and stock as their favourite, based on a taste test.

The dishes were cooked on the day by Bill Smithson, Chef at Café Together in Easington. Bill said: “It’s been a hugely symbolic event for myself and the other local craftspeople who’ve played a part in delivering it. Held on the former pit sit, this land was once the heart and soul of the area – and to see the community coming together again directly above where the men of Easington worked below ground, has struck a chord with many of us.”

Artist Gayle Chong Kwan, who has been visiting the area for the past two year, carrying out research and holding events and activities, said: “This event has been an amazing culmination of the two years of The Pan Hag project – the turnout was incredible, and people’s engagement with all the different activities, including the world’s 1st Pan Hag Championship was brilliant. I’ve already been asked if this event will be a yearly festival!”

Nikki Locke, head of East Durham Creates added: “It’s wonderful to see so many talented people coming together to show some of the fantastic skills we have in this area. Saturday’s event was a great example of artists working alongside communities to create something really special – who knows what it might lead to in the future.”

East Durham Creates is an Arts Council England-supported project, working across the East Durham area and aiming to get more people involved in arts and creative activity. We are working with residents to deliver an ambitious arts programme – every element of which will be community-led in some way, and totally distinctive to the area – inspired by East Durham the place and by the people who live there.

East Durham Creates will offer new experiences to inspire and delight. It will build on and support the vibrant existing arts activity in the area, and develop skills through the arts, helping to bring about long-term, lasting change.

The East Durham Creates team are collaborating with groups and residents to explore what the arts and creativity can offer local communities, testing out lots of different approaches to see what works (and what doesn’t) – and doing all we can to help sustain activity beyond our Arts Council England grant.
East Durham Creates is one of 21 Creative People and Places projects nationally, funded by Arts Council England. It is managed by Beamish, Forma Arts, and East Durham Trust working in partnership and supported by Durham County Council via East Durham Area Action Partnership and Culture and Sport Services. www.eastdurhamcreates.co.uk

East Durham Creates is part of the Creative People and Places programme, initiated and funded by Arts Council England. Creative People and Places is about more people taking the lead in choosing, creating and taking part in art experiences in the places where they live. There are 21 independent projects, each located in an area where people have traditionally had fewer opportunities to get involved with the arts. www.creativepeopleplaces.org.uk

Forma Arts is one of Europe’s leading creative producing agencies, working with British and international artists to develop and deliver new projects across the world. Established in 2002 in Newcastle upon Tyne, and now based in London, the company is widely acclaimed for its high quality, contemporary, cross art form productions.  www.forma.org.uk