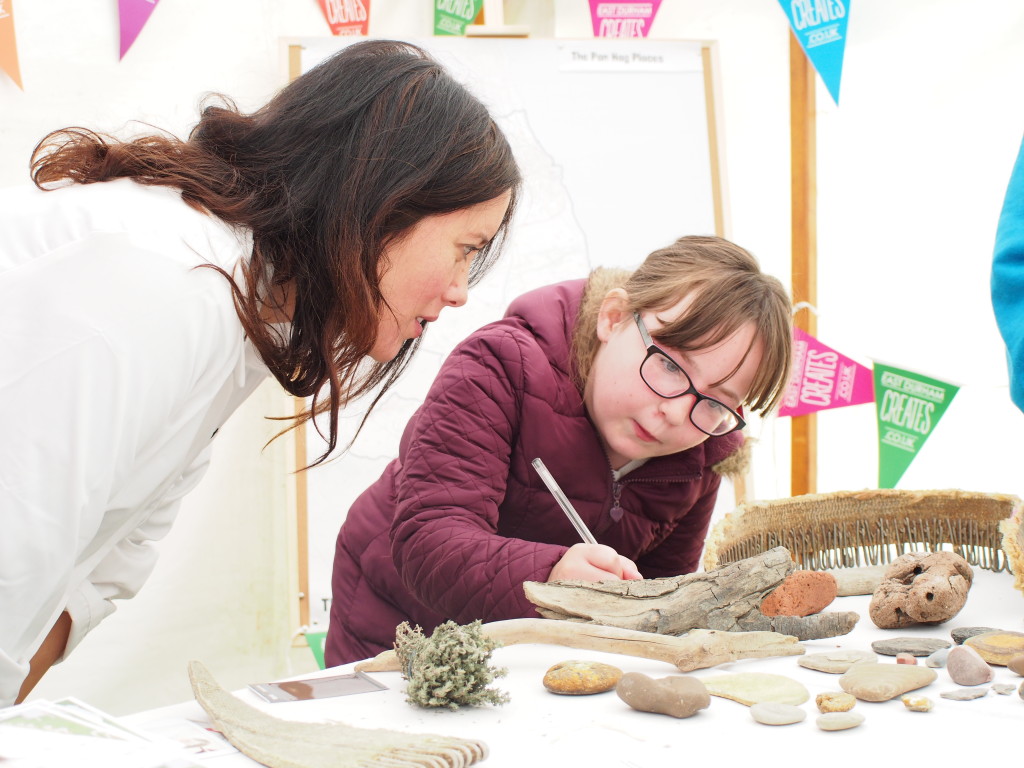 Gayle Chong Kwan at The Peterlee Show on September 5th 2015

International artist Gayle Chong Kwan will host The Pan Hag Field Kitchen on Saturday 1 October 2016, 12 – 5pm, as part of the East Durham Creates programme, one of 21 Creative People and Places projects nationally, funded by Arts Council England, working across the East Durham area with the aim to get more people involved in arts and creative activity.

This free outdoor event invites the public to explore and record the lost and overlooked traditional skills and customs related to crafts, growing, food and nature, at this fun, creative day.

Gayle has visited East Durham numerous times since May 2014, working with groups and individuals to deliver a participatory arts project that celebrates the area’s rich heritage, produce and pastimes. Throughout the two-year Pan Hag project, she has gathered stories, memories, pictures and recipes from communities, which along with items curated from this event, will form a printed legacy of the project, The Pan Hag Map – a new alternative guide to East Durham (available from early 2017).

Here she shares her experiences after spending time working in East Durham.

Forma had known about my large-scale art projects in the public realm, which I often develop by working in a particular context or with a community. I had recently spent two years developing a project in Berlin, where I worked with allotment holders throughout the city. One of the curators came to an art event that I did at Tate Modern, ‘Gardens of Adonis’, which explored food, rituals, myths, and the senses, and they got in touch with me about developing a piece of work in East Durham.

Is it difficult as a London-based artist to deliver an arts project for East Durham’s local community?

East Durham’s local community is incredibly welcoming. I have fallen in love with the area and people. I am Scottish-Chinese Mauritian, so the connections and links that communities make with places of their birth or landscapes that are meaningful to them, is important to me. I do not have one clear place to which I belong, and I am fascinated and excited by people’s relationships to place.

What are your fondest memories from previous trips to the area?

It is really interesting for me now as places that I first visited two years ago, when I was being introduced to the area, and when I was trying to make sense of the special qualities and challenges of the area, now feel much clearer and richer. It is almost like when you start to learn a language – the mist clears and you start to understand how things relate to each other and their meanings.

One of the early parts of the project was a series of Sensory Walks through different parts of the area, which involved people often walking blindfolded, or tasting local produce at different points along the way. Those will always stick in my mind, as they were great fun, pretty bonkers, but also really informative, as I worked with a local historian or specialist to develop each walk.

Was there a story that you heard or something in particular that influenced you and inspired your work?

I started visiting the area and talking to people in the area, then hosting small scale events, walks, and larger events during which I collected stories, memories, recipes, and local dialect words. From these, the idea of The Pan Hag started to develop. Everyone kept talking about one dish – panackerty or pan haggerty – for which each person had a different recipe, different ingredients, and even different spellings of its name. It became clear what an interesting, and controversial dish it is, and one that is integral to the area. People have such fond memories of it, as a dish that was cooked by their mothers and grandmothers, and also one which featured many local ingredients particular to each place, and often grown in the local allotments. I had a fantastic day bringing the ’Pan Hag’ project to the Peterlee Festival in 2015. The turnout was great and we collected a huge range of recipes of traditional panhaggerty. The difference in ingredients and techniques were fascinating – some included corned beef and dumplings, others black pudding and bacon, or meat from the Sunday Roast, cheese and potatoes.

I have collected such a huge variation in Panackerty recipes, each of which taste delicious in its own way, one I particularly like is for ‘Panaculty’, from a man in Easington:

“A recipe that mam used to make, it’s not so commonly made these days, I think this is due to the abundance of ingredients from supermarkets. Made with sliced potatoe, corned beef, onions, carrots, in a thin watery gravy. It was flavoured with fancy herbs which were not readily available. I think traditionally it was made on Monday from the leftovers of Sunday dinner. Nowadays if we have any leftover tattie from Sunday dinner and fry it up with left over vegetables in a frying pan until the tat tie has a slightly burnt crust on it, with a fried egg, lovely.”

Are you planning to use local produce or objects as part of the project?

Local produce and objects are at the centre of the artwork. In the work I take the role of ‘The Pan Hag’, a character who, like panackerty or panhaggerty, collects, records and shares East Durham’s cultures, customs, myths, growing, and cooking in its diverse landscapes over the seasons. The Pan Hag reflects the way ingredients are brought together in the local dish of panackelty, panacalty, panaculty, panhaggerty, pan haggerty, or abbreviated as panack. The project, like the dish, focuses on a place or object in which different elements, often local, everyday, or leftover, are brought together and shared. ‘Panhin’ is an old English word for a small cooking pan, and the casseroled dish consists of meat, vegetables, potatoes and cheese, cooked throughout the day in an oven pot on low heat, usually served in the dish in which it is cooked. Historically a favourite of miners, the hundreds of variations of the dish are passed down through the generations, with the name possibly deriving from ‘hashed’ as in ‘chopped’, or from ‘ragged’ for its irregular appearance. Variations on the dish appear all over the world, from French potato gratin, to Scottish stovie.

We have an exciting and special Pan Hag Field Kitchen event that I am holding on Saturday 1st October on the former pit site of Easington Colliery, where a fantastic group of local enthusiasts in craft, cooking, walking, games, and history of the area will be running workshops, walks, and activities for local people to come along and try, taste, and make.

What are your hopes for the legacy of this project?

It is really exciting that all the activities, texts, images, and works will have a life after the ‘The Pan Hag Field Kitchen’ event in October, as the workshops, demonstrations, and events on the day will generate recipes, photographs, drawings, memories, and skills, that I will develop into ‘The Pan Hag Map’ – an alternative guide to the area – which will be published early 2017. The guide will be a culmination of the two years of the project, and will celebrate and provide new perspectives on the people and place.

Forma Arts are an incredible organisation to work with, as they really put high quality art at the centre of everything they do. They allow artists to really immerse themselves in a place or get to know people so that the artwork that develops becomes something unexpected, exciting, and yet integral to the people and place for which it is commissioned.

I think there is great engagement and creativity in East Durham that with the encouragement and support of East Durham Creates will thrive and grow. I think it is fantastic for artists, musicians, and film-makers to be able to connect with such a special place, and to bring different ideas and perspectives on the place, but also it is an amazing opportunity for people to be inspired by such a special place themselves. I feel incredibly lucky to have had the chance to spend time in East Durham.

There are so many aspects that make East Durham special – it has such a unique history, that is virtually inscribed in the landscape, people in the area never rest on their laurels but organise and create events, workshops, community activities themselves. The people are incredibly open, generous, friendly, and have fascinating stories and histories themselves.

4) The landscape is incredibly varied, so visit as many different types of place as possible

5) Walk along the beaches