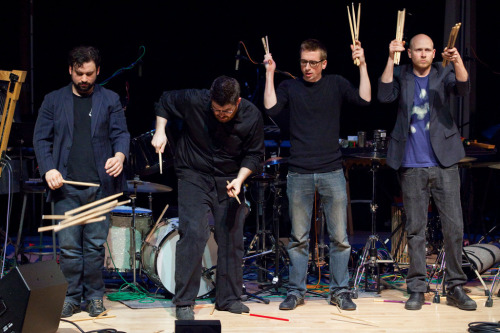 From Out a Darker Sea
Sō Percussion
Thursday 18 August, 7 – 9 pm

So Percussion recently visited East Durham to collect stories and create a music performance that will premiere on Thursday 18 August 2016 as part of the East Durham Creates programme, one of 21 Creative People and Places projects nationally, funded by Arts Council England, working across the East Durham area with the aim to get more people involved in arts and creative activity.

The New York based ensemble has visited East Durham several times in the past 2 years. During their visits they had the opportunity to interact with people from the local community, learn more about the history of the place and find inspiration to develop their new musical performance, From Out a Darker Sea.

AS: Forma first approached us about collaborating on a new commission.

ECB: The project got kicked off when Forma and East Durham Creates invited So to come visit the area and learn more about the history and people in the region.  None of us had visited Northeast England before, so it was really amazing to learn about everything from scratch!

Is it difficult for a New York based music group to create a music performance for East Durham’s local community?

ECB:  Yes, this is definitely something we’ve thought a lot about.  We’ve tried to approach the fact that we’re outside this community with honesty and humility.  There are things we just can’t know about what it’s like to live in the East Durham area.  But one thing we’ve seen through our visits is that there are also things that connect us.

AS: Yes! We work hard to strike a balance of getting to know the local community and also presenting an authentic work that represents our own interests and influences. We search for elements that speak to universal experience, filtering the specific things we see and learn in the community through our own perspective. In that sense, we are creating this work both for the community and also for ourselves, as we have found that making work that moves us usually gets the best results. Too much time spent trying to figure out what other people would want you to do gets you running in circles!

I think it would be foolish of us to try to sum up a complicated local culture or community after just a few visits. But you can be influenced by what you see and hear. We picked sea glass, toured the mines, met former miners, worked with young students, walked along the sea as the tide moved in…

What are your fondest memories from this trip or a previous trip?

AS: We each would have different ones. I had a blast going out to Beamish with Ashley, who knows the place inside and out. You know that the place is a kind of theme park, but after spending a solid day there, you do get into the spirit of it.

ECB: I really enjoyed working with the students from East Durham College on the video portraits that we are including in the show.  The students have each picked a friend or family member, and they are shooting a ‘portrait’ of that person, but as a video instead of a picture.

Was there a story that you heard or something in particular that influenced you and inspired you to create this upcoming performance?

ECB:  There are several things that have really stuck with us as we’ve worked on creating the piece.  There is a story from a former miner named Freddie that has become an important part of the show (he was filmed by some of the members of Amber and that footage and his story are included in the performance).  And also there was a couple named Harold and Sylvia that we met on the visit – Harold was fighting ALS, and the story of their struggles became an inspiration for us.  We also were struck by the sights and sounds of the area – the sea, the coast line, and the rape-seed fields.

AS: We actually use footage from an interview that the folks at Amber conducted with an older former miner. It is a heartbreaking story of a young man named Billy who died in the mines. Our show doesn’t dwell extensively on the struggles and tragedies of mining, but the incredible lilt and pattern of his accent makes the last chapter of our piece come to life. We tie his voice in with one of our other main themes, the sea. Every chapter in the work is inspired by something we encountered during our residency visits. Our first trip was in May 2015, when the brilliant yellow rapeseed flowers bloomed across vast fields just up from the coast. We started to think of the contrast between the black of the coal soot and this incredible yellow of the flowers.

Are you planning to use local instruments or objects as part of your performance?

AS: Our instrumentation for this particular show is pretty spare by Sō Percussion standards. It seemed to fit the way the music was coming together. The most vivid local elements will be found in the video. In addition to the wonderful videos from the Amber collective of the sea and the miner’s story, we have been working with students at East Durham college to create video portraits of ordinary scenes in their lives. We wanted the folks in the community to know that we do not just view their community through the lens of the mining history, as rich as that history is.

ECB:  As of right now, most of the music is performed on traditional percussion instruments… but all of the video footage used in the performance will come from the local community.

ECB:  I would say that this project would have been completely impossible without Forma Arts.  Every single person from Forma who has worked with us on the project really tried to understand what we were thinking and provide the resources to help us make the abstract ideas we had turn into real end results.  For us, a project like this simply wouldn’t be possible without that kind of support.

AS: We love Forma! Local residencies can be tricky, and Forma strikes a perfect balance of connecting us with a community and also encouraging us to follow our own artistic path.

AS: My first thoughts are about the younger generation that we met in the area. By and large, they are connected to this vast global culture that we now have. Although local engagement will always be the bedrock of arts outreach, I saw a tangible generation gap in East Durham between those who identify primarily with the local culture of the mines, and those who see themselves as part of that global network. This trend is happening everywhere we go: in a new place I imagine we’ll run into all of these fascinating differences, but in the end the young people are watching similar tv shows, listening to the same music. There is a flattening that is happening, which has both dangers and advantages.

I’m not sure what that means specifically, but part of what helps is to recognize that access to arts and culture doesn’t follow the same rules that it did 30 years ago, at least where digital access is concerned. Live performance is still the most thrilling way to encounter music, and that disparity does still exist geographically.  But kids in East Durham have the same internet that kids in London do, and they can be turned on to amazing things.

AS: Humor! I know that’s a famous English trait in general, but I absolutely loved the conversations we had all over the community. East Durham is full of vivid characters.

2 – The mines are essential to this place, but go beyond them.

3 – If you feel the need to mention Margaret Thatcher, strap yourself in.

4 – Don’t bring an agenda with you as to what you think this place is about. You’ll learn more from people without one.

5 – Don’t just find what’s different about this community. Find what is universal.

Tickets are now ON SALE!