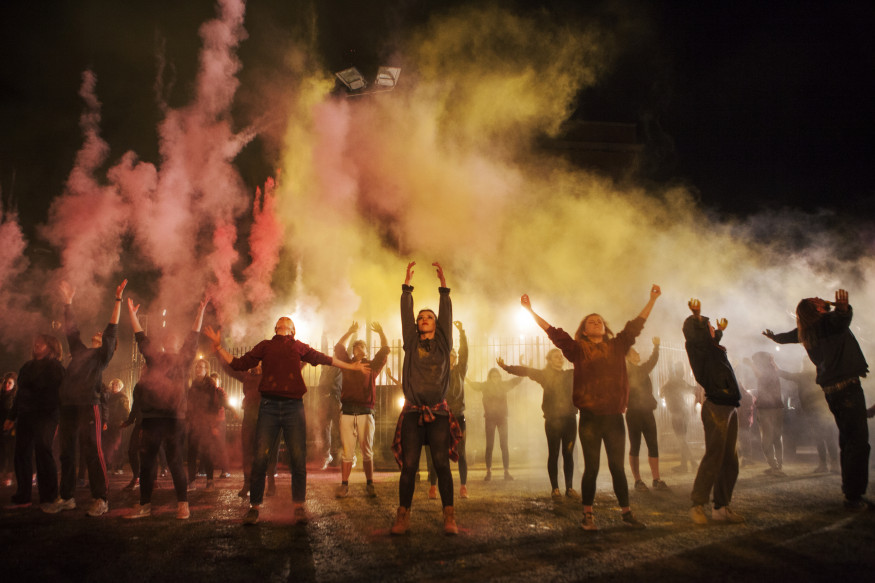 A group of young dancers from East Durham we’re involved in a really special event over Easter weekend in South Shields.

Commissioned by our friends at The Cultural Spring (Sunderland and South Tyneside’s Creative People and Places programme), RUSH, was a mass movement spectacle created by Southpaw Dance Company and produced by Event International. The performance was created with around 100 local participants from key wards in South Tyneside and Sunderland, as well as a group from East Durham.

The Rush Project was inspired by a 21st Century phenomenon; all over the world people have shown their dissatisfaction with prevailing social and economic conditions by taking to the streets to protest.

Garage Urban Styles Dance Studio, a community dance group with around 100 members from Peterlee and Horden, responded to the open call for participants for RUSH. With the help of East Durham Creates 20 members of Garage Urban Styles Dance Studio, aged between 10 and 22 years old, took part in the project, which consisted of 8 dance, writing and film workshops and rehearsals at East Durham College over 11 weeks, which helped to derive material that formed the show.

Using the material developed at the workshops the piece followed three archetypes; a zero hours worker, a young mother, and a homeless character. Through the lens of their stories RUSH told the wider story of the issues people in areas of here low engagement face.

The final show, which took place at St. Hilda’s Colliery on Sunday 5 April, was made up of mass movement from around 100 participants (including those from East Durham), projection, film and special effects. An audience of approximately 550 turned out to see the spectacle, and feedback has been fantastic.

“The Garage Urban Styles were very happy and overwhelmed with the process and the final look of the rush project. It was a pleasure to be involved, and inspirational for our dancers, can’t wait to be involved again!!”

You can watch the film created by Darren O’Kane here