On Friday 17 and Sunday 19 November 2017, twenty-four people from East Durham took part in ‘The Umbrella Project’ by Cirque Bijou at Durham Lumiere Festival. The group were a mix of young people from East Durham College, The Garage NE and Haswell Mencap, plus other brave local people, all excited to try something new and give it a go!

Being with the creative group… they have time for you, help you learn the moves and want you to be part of their team. That’s been the best bit! – Caroline (Participant)

With support from the Cirque Bijou dance leaders, the group were quickly learning the routines, creating their own choreography and having a lot of fun along the way!

My favourite bit was being out with all our trainees, doing the routines and watching their faces enjoy every single moment of it! – Joan (Support Worker at Haswell Mencap)

The group performed in three teams during Durham Lumiere Festival, winding their way around Durham City and entertaining the crowds with their beautiful glowing umbrellas. 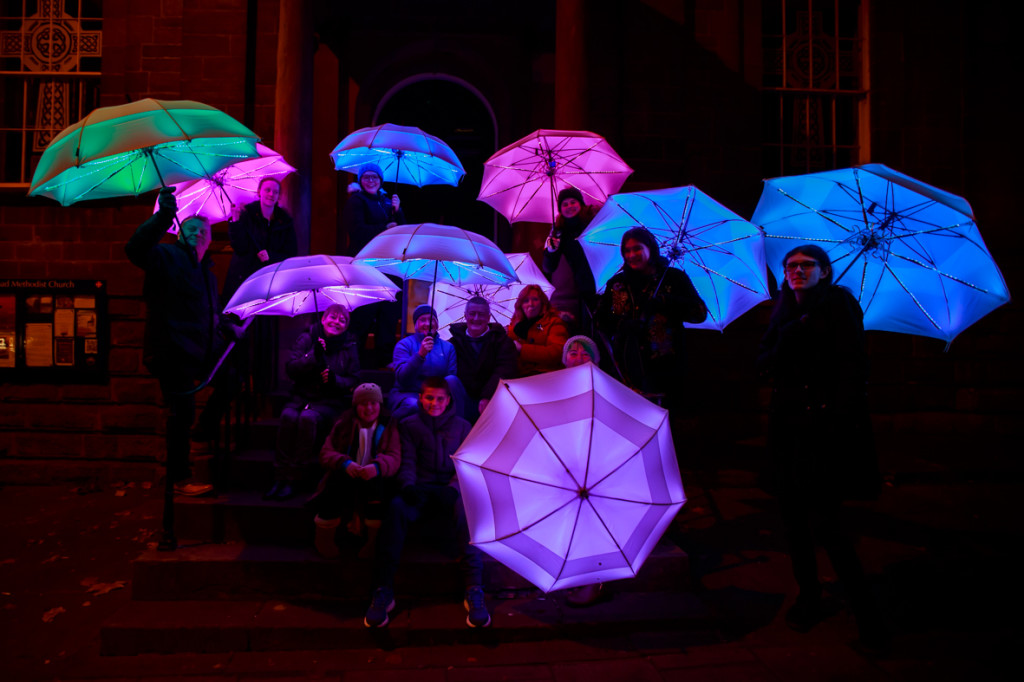 [My favourite moment] was seeing the bairn’s faces, especially when you give them the umbrella, their faces just brighten up! – Terry (Participant)

It’s pretty surreal to be fair, we’re just a bunch of kids from College and now we’re performing in the biggest light Festival in the North East… it’s pretty amazing! – Amy (Student at East Durham College)

I’ve enjoyed me and Terry being able to do something together. – Tracey (Participant)

It has been great, it’s something I never thought I’d ever do. – Terry (Participant)

It was a one off opportunity I could not miss, it was great fun and good to take part in. The organisation was brilliant and we had somewhere to go and practise as a group and got looked after. – Participant

Exceeded my expectations and all the people – workers and volunteers were lovely, enthusiastic and fun. – Participant

It was fun and helped improve my social skills, this is because I mingled with the public. – Participant

I thoroughly enjoyed taking part – very professionally done, and with the fun factor which is equally important. – Participant

Appreciate the opportunity to take part in such a brilliant project. It took me out of my comfort zone – smiling and happy – thanks! – Participant

I loved the organisation, the different characters, because there’s loads of different personalities and characters [here]. The best part was seeing the people’s faces, especially the children, if you gave them an umbrella, or did the ‘catwalk’ [routine], that was definitely the best part. – Janet (Participant)