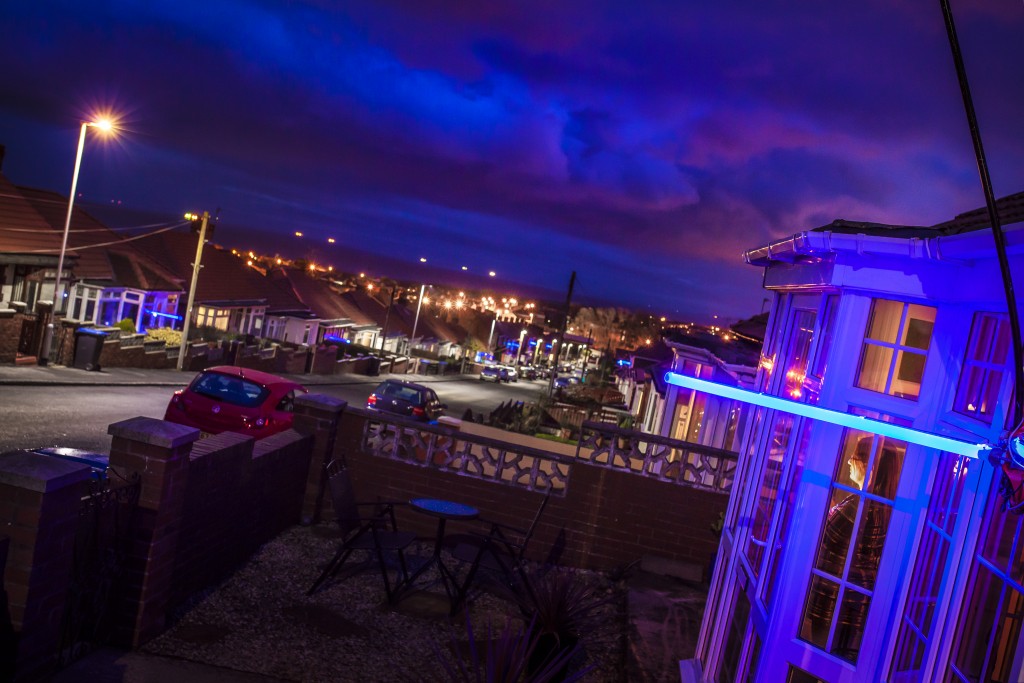 Reigniting community spirit through creative technology was the key aim of VoiceOver, which was unveiled to Horden residents, connecting neighbours together through an interactive chain of light and sound that weaved through the streets, from Friday 25 to Monday 28 March 2016.

During Easter, the neighbourhood surrounding Roseby Road Wellbeing Centre was transformed by this cutting-edge art project developed by Umbrellium and produced by Forma with local people as part of East Durham Creates, a cultural programme which aims to get more people involved in arts and creative activity.

At the heart of it were the 34 residents who volunteered to become VoiceOver Hosts, which required them to display a Light Antenna on their homes and a Radio Box inside – that lit up and broadcast live as voices passed through and round the streets.

Almost 400 people from Horden, Peterlee and further afield attended over the duration of the four-day event, both as active participants and spectators, some just curious, but many keen to embrace this unique experience.

“…there’s no need for people to ignore each other, especially neighbours. When you live so close, why can’t people interact.”

“It made us feel really happy because round here you don’t get to do things that are free and there’s nothing that really happens [around here], so [like] this is the first opportunity we could take part in.”

Mary, VoiceOver Host and resident of Roseby Road said:
“… it makes us proud […] to be part of VoiceOver – I think it’s great.”

Creative technologists Umbrellium, who are based in London and work with urban communities all over the world, led consultation with the people of Horden. During these sessions, people spoke about how they didn’t know their neighbours and the lack of public activity, particularly after dark. In response, VoiceOver aimed to spark new connections and conversations and strengthen the local community, whilst giving residents a sense of ownership of this exciting new public art work.

“It’s a communication infrastructure, designed and deployed in collaboration with local residents and organisations, that everyone can listen in on […] As sound passes up and down the streets, each fragment lights up in response to the different voices and sounds passing through it, making explicit the lines of communication.

It’s not an “efficient” communication tool: a phone would have been better for one-on-one conversations […] But the aim was to get as many people as possible together at the same time, communicating with others they might not even know, and meaningfully involved in creating, installing, supporting and bringing to life a cultural infrastructure – one that actively encourages performance, sharing and storytelling. It’s not that “together” is better than “efficient”. But it certainly has different outcomes. When people work together, my experience is that they have a greater sense of agency and accomplishment, as well as more responsibility and ownership in outcomes.”

“We aim to continue to work with Umbrellium and hopefully persuade other urban communities all over the world to do this project, to connect neighbours locally. And one thing I want this community to know […] is any publicity material will say ‘Made in Horden’,  in honour of the enthusiasm, co-operation and the trust that Horden residents put in us to deliver the prototype. This [project] makes us feel proud because this is a completely different way of working for Forma and it’s certainly a direction we’d be wise to follow in the future.”

Nikki Locke, Head of East Durham Creates added:
“Something very special took place on these streets during VoiceOver which wouldn’t have been possible without the residents involved. I hope it leaves a lasting memory.”

Horden switched on to creativity with VoiceOver project – Hartlepool Mail

“Technology is the answer, but what was the question?” On art, smart cities and bringing people together – City Metric

A Network of LED Antennas Brings a Neighborhood Together – Creators